God Summoning is the Souma Clan's original, most essential magic - and at the same time, the most dangerous. It is a magic that summons a god and letting it possess the user's shamanic body while it falls to a comatose state. An extremely powerful, but simple spell that causes the user's spiritual power to explode, and shifts the earth's spiritual pulse and causing the sky to shake. It is so powerful that the aura that is coming from the user's body overflows in the world and the presence it gives was huge and indescribable, it even transcends the concept of space itself. Its number couldn't be described either. It was both one and thousands, surpassing the concept of 'number'. Humans couldn't accurately grasp its true form. While greatly disturbing the spiritual flow, it also causes spiritual disasters to form up to Phase 4.

It also affects the user's body, causing his or her spiritual power to undergo an immense change making him/her even stronger than before. 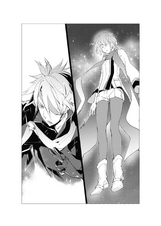 Add a photo to this gallery
Retrieved from "https://tokyo-ravens.fandom.com/wiki/God_Summoning?oldid=9338"
Community content is available under CC-BY-SA unless otherwise noted.